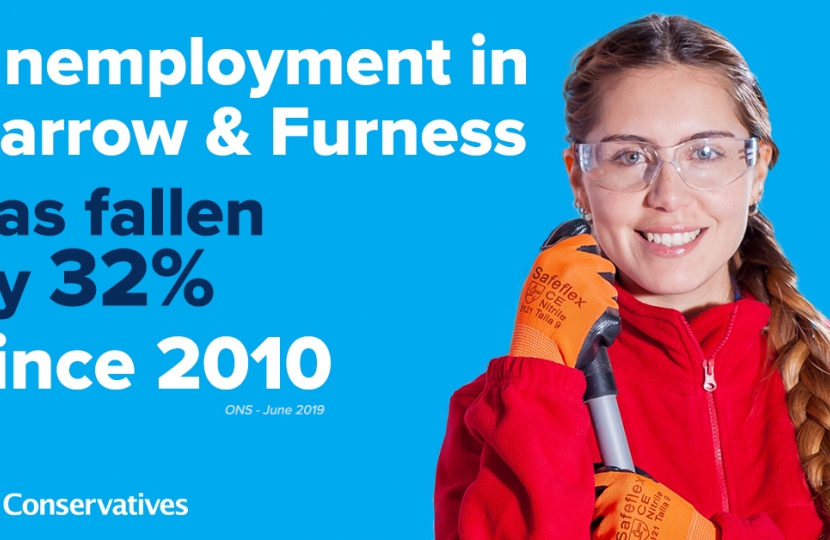 Figures released today show that in the North West, there are 3,473,114 people in work – meaning that, under the Conservatives, 294,140 more people have been able to access the security of a job since 2010.

In Barrow and Furness, the number of people who are claiming key out-of-work benefits has fallen by 627 since 2010 – an overall reduction of 32 per cent, meaning fewer people now need this support because they have the security of a job.

The figures show that the number of people in work has reached a record high, while the unemployment rate is at its lowest since the mid-1970s, at 3.8 per cent.

And with wages rising at their fastest pace in 11 years – ahead of inflation – people's pay packets can go further.

Behind every employment number, is a person and a family whose self-esteem, mental wellbeing, economic circumstances and life chances are all vastly improved by being in the workplace.

Simon Fell, Conservative Spokesman for Barrow and Furness has welcomed these figures, saying:

"These figures show our balanced approach to the economy is working. We are backing businesses across the country to create more, higher-paying jobs through our modern Industrial Strategy.

"There are a record number of people now in work and the Conservatives will continue to help people build a better future for themselves and their families.

"Labour doesn't know how to handle the economy and would hurt the people they claim they want to help, just like last time."

Alok Sharma, the Minister for Employment, responded to the latest employment figures, saying:

"Wages outpacing inflation for 16 months in a row, more people in work than ever before and joint-record female employment, means better prospects for many thousands of UK families and shows the continued resilience of the UK labour market.

"With unemployment still falling, remaining at its lowest level since 1974, it's clear that UK employers continue to have confidence in our hard-working workforce.

"And with many schools breaking up this week there are some great opportunities for young people to get a taste of work over the summer – boosting their CVs as well as their bank balances as they prepare for their future careers."