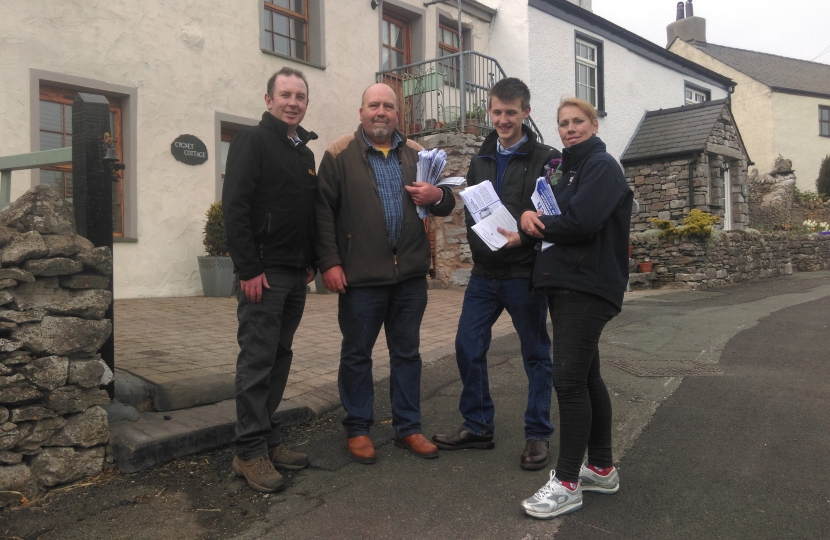 Conservatives across the rural Wards of Broughton, Mid and Low Furness are celebrating a set of very strong results in the local elections on Thursday. Whilst much media attention was rightly focused on the General Election, the 7th May was also very important as 3 South Lakeland District Council seats were up for grabs. Leader of the Opposition at the County Council James Airey strengthened his position by easily winning his Low Furness District seat with a huge majority.

Speaking at the count Cllr James Airey said “ I want to thank the people of Low Furness for again trusting me to represent them at SLDC, I am delighted that I managed to get more votes than all the other four candidates put together. I promise to work hard and fight for a fair deal for our area”.

Andrew said “The residents of Mid Furness wanted a Councillor who will listen to them and vote for what they want, I will do that.  I will not be told by Kendal based politicians what to do, I remember that my first duty is to represent the people who voted for me and am looking forward to joining the local Conservative team at the Council”.

In the Broughton Ward Conservative Candidate John Longmire narrowly missed out on victory by just 19 votes.

John said “We fought a strong campaign based on local issues and received tremendous support all the way through our positive campaign. Thank you to everyone who voted for me, I fight on and fight to win next time, the people of Broughton Ward deserve much better”.