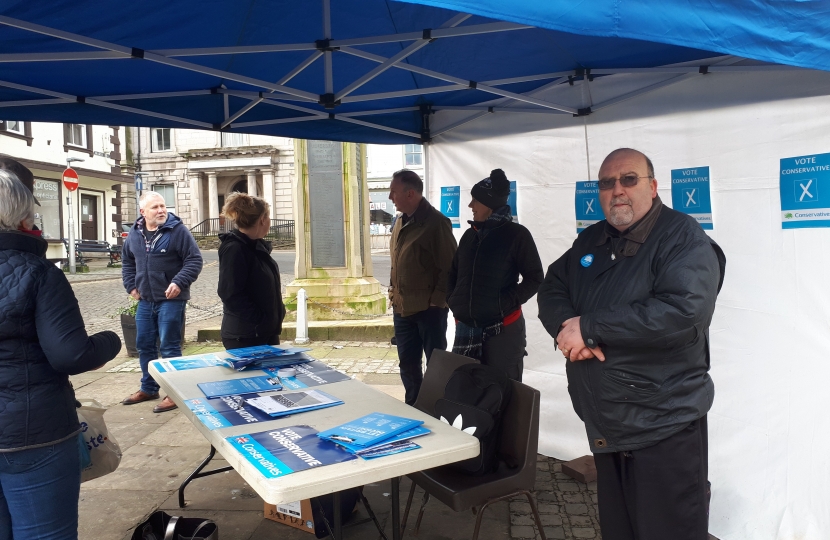 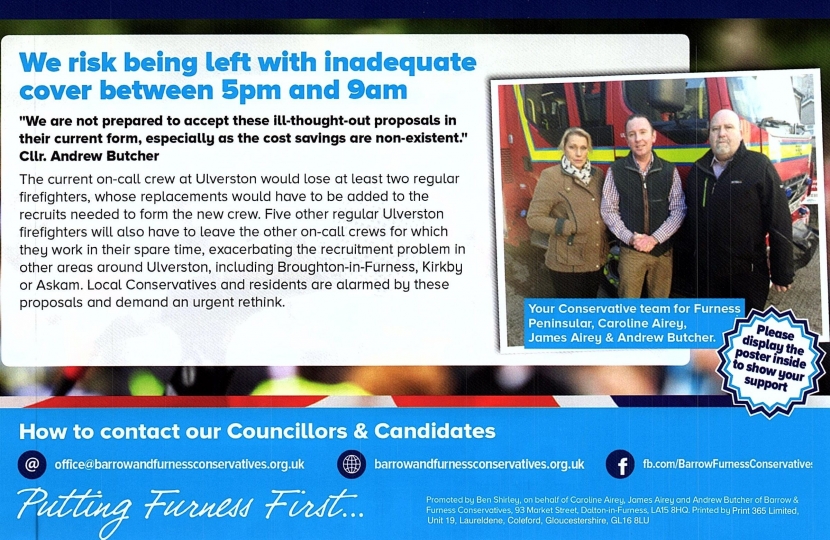 We have received phenomenal support from the public at the launch of our petition to preserve 24-hour fire crews at Ulverston Fire Station. Thanks to all the people who have already shown they share our deep concerns about the proposals to rely on retained fire crews rather than full-time blue light responders.

Cllr James Airey, who represents Ulverston on both Cumbria County Council and SLDC, has met with fire crews at Ulverston to hear their concerns.

He said: “Local residents are deeply concerned about the withdrawal of full-time fire crews in Ulverston, and rightly so. While the dedication of retained fire fighters is not in question, the matter of resilience and the additional blue-light response that the highly trained full-time professionals offer is being overlooked by local Lib-Dem and Labour councillors, who won’t listen to local people and refuse to properly consult on this proposed change.

“The existing full-time crew in Ulverston are trained to be first responders at serious road traffic collisions, deal with flash-flooding situations to rescue people trapped by fast-flowing water, and are licensed to drive the fire tenders above the speed limit under blue lights and sirens, which the retained officers are not. We also have to ask whether full-time or retained officers are better prepared to respond to a major incident at Glaxo or BAE Systems, or indeed a terror attack.

“It’s sadly ironic that at a time when the Conservative Government has provided millions in funding to build a hi-tech Blue Light Hub in Ulverston, local Lib-Dem and Labour politicians are threatening to pull the rug from under effective fire and disaster response in the town and surrounding areas.’

Ulverston Town Councillor Andrew Butcher, who also represents Mid Furness on SLDC, added: “The existing network of retained cover is already stretched, with issues around recruitment, retention and supporting those crews with the various complex training programmes required to be a modern blue-light responder.

“The current on-call crew at Ulverston would lose at least two regular firefighters, whose replacements would have to be added to the recruits needed to form the new crew. Five other regular Ulverston firefighters will also have to leave the other on-call crews for which they work in their spare time, exacerbating the recruitment problem in other areas around Ulverston, including Broughton-in-Furness, Kirkby or Askam. Local Conservatives and residents are alarmed by these proposals and demand an urgent rethink.

“We are not prepared to accept these ill-thought-out proposals in their current form, especially as the cost savings are non-existent. The cost in terms of risk to life may well turn out to be much heavier.”

Save our Full Time Fire Service