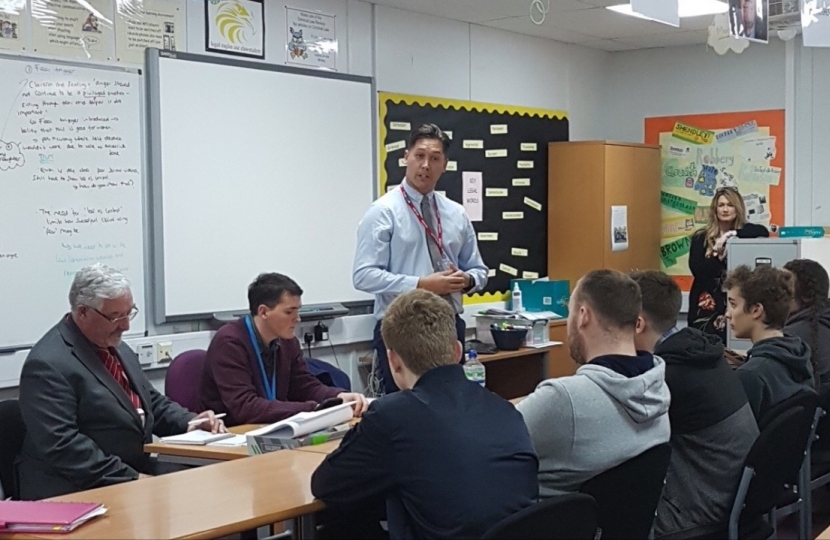 Barrow and Furness Conservatives gave an inspiring vision of the future to students at Barrow Sixth Form College, during a Question Time-style event on December 4.

The forum was organised at the college by young Furness Conservative member Logan O'Brien, who invited Conservative county councillor Ben Shirley of Askam to take part.

Ben spoke inspirationally to the young politics students about the prospects for young people in the area thanks to the Conservative government's commitment to defence jobs and to promoting skills; about the career prospects open to those who choose to go into work rather than leave the area for university after sixth form; and about the skills base in the Furness area which the Conservative government is determined to nurture and develop. The students were very interested in Ben's discussion on the rewarding aspects of being politically active within the community and he invited those interested to get involved with the recently formed youth group of Barrow and Furness Conservatives.

Ben said: "So often, these kind of things are usually headlined by MPs and prospective parliamentary candidates, so it was nice for grassroots politics to be represented. This was the first time I’d ever done anything like this and I’d love to do it again.

"I found the experience to be insightful, engaging and interesting. The questions were challenging and allowed me the opportunity to discuss and promote some of the excellent success story’s which we have here in Furness & to demonstrate the opportunities which lay ahead for our young people. Listening to the college students in a forum such as this, provides an insight into their aspirations, their own concerns and the challenges which they face and this helps me to think differently about policy, priorities and my own aspirations in local government. I am the shadow cabinet member for schools and education, so this was right up my street and was exactly the group of people I want to listen to and learn from.

"I think that events like this show that we are keen to engage with and listen to the younger voters."